Another busy weekend coming up….Four solo gigs this weekend, but the one I’d like to pimp on here is Sunday 29th at 6 at The Three Tuns, Sherriff’s Hill, Gateshead. Paul gave me my first solo bookings and encouraged me a lot at the end of last year and start of this. My solo “act” has come on a bit since then and I’ve done a 12 track album using Ally Lee’s support too. Now I know this clashes with the sh1tkicker’s ball, but if you’re not there it’d be great to have your support at The Tuns. I’ll be playing tracks from the album, and selling it, including a couple of my own songs and a bunch of others too. The tuns will be set up with tables and candles and I’m hoping it’ll be a great atmosphere if anyone turns up!!!! Could be the start of intimate laid back Sunday sessions at the tuns if we’re lucky.

Rehearsals and performances from Long Ridge Road this week!  Acoustic vocal group.  Free performance at The Black Bull in Blaydon (NE21 4JJ) on Friday night (20th Sept) ahead of a private party the next day.  I shall enjoy this immensely!

Hey, what a day – the rain in the early stages couldn’t dampen the enthusiasm, and the sun came out towards the late afternoon.  Great crowds.  Probably the best headliner performance I’ve seen there – The Pretty Things.  Dead tight, cool looks and great tunes – felt like a packed club even though it was outside in the market square.  Special mention also to The Tom Atkinson Band.  Couldn’t get to see anything else!

I was knocked out by the reaction to my solo set in The Quays.  Packed (as all venues are at this fest) and full of people really enjoying themselves.  Great to see so many friends and two guest harp players!  You all made me very happy so thanks loads folks.

Thanks to Mike Prendagast and the Darlo r+b club crew for putting this on every year.  More power to your elbow!  Thanks to The Quays for having me.  Great bar and such nice folk running it.

Looking forward to this weekend as it includes Darlington r’n’b festival on Sunday 15th September – one of the highlights of he year.  This year I’m doing a solo set at 5.15 in the Quays Pub.  More details on the whole event here: http://www.darlington-r-n-b-club.co.uk/marketFestival.html .

I’ll be joining Ally Lee and trying to get a word in edgeways on his Roots Rock Riot Show on Lionheart FM, this Wednesday 4th September, from 7 pm.  I’ll be previewing the album “Trigger Finger” and talking rubbish for a couple of hours ;).  Hope you can listen in.

Just back from a fantastic weekend…  The Bandits played a great last minute booking at The Black Bull In Blaydon on Friday as a warm out for the North East Motorcycle Action Group Stormin’ the Castle Custom Bike Show.  The following morning I was off to Stormin’ to do a set with Ronnie Semple (on harp) as the duo Oil City Shakers in the Hobgoblin tent in the afternoon.  The reception from a packed tent was fantastic, and the first copies of the “trigger Finger” CD sold well!  Then a quick pack up and over to the main stage for the soundcheck, a few beers and a bite and checked out Bessie and The ZInc Buckets and the wonderful Blue Diamiond before watching the Kill on the mainstage.  Then it was Bandits time again and we got our usual great Stormin’ welcome – cheers! – before the headliners, From The Jam took the stage. 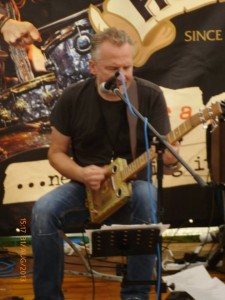 Caught up with loads of old friends – especially the Stormin’ crew and marshalls.  Thanks again.

This weekend coming I’m out playing solo at Saltburn Blues Club supporting MORELAND AND ARBUCKLE on Friday 6th September (Saltburn Community Theatre, Albion Terrace, Saltburn-by-the-Sea, Cleveland, TS12 1JW) – should be a cracker.  Then out with Oil City Connection on Saturday night of the 7th at The Schooner Inn in Gateshead, and then solo again on Sunday the 8th at The Wheatsheaf, Roker Ave, Sunderland, SR6 0BN from 4.30 pm