I’m grateful that the album seems to be going down well. IBBA pick of the month for December 2014 and available here –  http://badbobbates.bandcamp.com/ .

Here’s some early feedback, warts and all 🙂 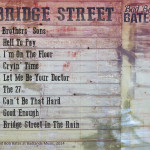 Gary Grainger (Blues Show, Bishop FM and Blues/Americana performer):  “Bad Bob Bates is a local legend, his band The Bandits have been around a long time – he is heavily influenced by The Feelgoods, Mick Green & The Pirates etc, but he loves the blues too. All originals on this album and even though I know the guy pretty well, i am surprised at the depth of this album – not just balls to the wall boogie (though there is some of that) – and some great Cigar Box Guitar slide stuff – but also a sensitive side too. I think you will like it. And I think i just started my review right there!”

“There’s a certain sense of satisfaction knowing that some of the most enjoyable music I’m hearing this year is coming out of our own North East region. Having fronted the Bandits (one of the most respected and best loved bands around) for decades, it’s no surprise that Chris – or BadBob Bates to his friends – has produced another strong offering.

“Bridge Street” is the kind of album that grabs you instantly by the balls, then kicks you right in them while name checking many of those that left their mark on it’s creator.

The initial double whammy of Seasick Steve influenced, hobo stomping “Brothers’ Sons” and the rip roaring onslaught of “Hell To Pay” combine to make one of those openings you will rave about to your mates for weeks.

The ambience of both tracks is outstanding, sandpaper raw vocals and over amped guitar combining to devastating effect, and the added wail of Ronnie Semple’s blues harp kicks like Louisianna hot sauce.

While the pace change of inoffensive but over long ballad “I’m On The Floor” outstays it’s welcome a little, listen to “Cryin’ Time” and “Let Me Be Your Doctor” and you can’t help but love the way they both utilise subtle recurring laments (reminiscent of vintage ZZ Top) to hang their hooks on.

As we all know, living that rock’n’roll lifestyle takes it’s toll and “The 27” (consult Wikipedia about The 27 Club) is a cautionary tale prospective members shouldn’t ignore, while “Can’t Be That Hard” gets the adrenalin pumping apace once more until “Good Enough” reigns back the horses for some heartfelt reminiscence, proving there is indeed a softer side to this bad boy.

With hooks aplenty and a whiff of Johnny Cash about it, “Bridge Street In The Rain” does a suitably excellent job of closing an album that cements Chris’s position as one of the most interesting blues artists around, and one you absolutely must own.”

And there’s more on my FB page:

Hagar: “Bought as I had heard a sample. Well pleased!”
Paulo: “Loving it, didn’t like track 8 much but overall I am impressed. Very well done to Blaydon’s favourite son!”
Mr H: “Bought this album recently and very impressed with it, if you haven’t bought it yet would highly recommend it.”
JG: “Well pleased xxx”
TK: “Brother’s Sons, Hell to pay, Can’t be that hard, The 27….hard. mean. dirty. I’m on the floor, Crying Time…sexy, gentle, moody. Love this album. And as I have said before, if you haven’t bought it…buy it :0) Oh, and Let me be your doctor? … rude! Whitesnake-type-rude!!”